Purchase all the top selling 3D printing products for the best price here!

Speaking to James Reeves, Managing Director at voxeljet UK who broke the news, I learn more about the V-JET X-IOB and its potential to reach truly mass, 3D printed production levels.

voxeljet is the manufacturer of the VX range of additive manufacturing systems. Applying binder jet based 3D printing technology, including High Speed Sintering (HSS), VX systems are capable of working with sand, plastics and ceramics.

According to Reeves, â€œvoxeljetâ€™s mission has always been to replace convention manufacturing with new technical developments. We have always led in terms of throughput, productivity and quantities, this has resulted in an increasing demand from our Global customer base for higher volume capabilities.â€�

Higher volume in particular is in significant demand as the technology attempts to move towards industrialization. In recent years, a number of projects have been launched in attempt to ramp up additive production, and integrate more automation into the process. Such efforts include Next Gen AM from Premium AEROTEC, EOS and Daimler, and the Stratasys Infinite Build system.

â€œWe therefore set ourselves a strategic R&D challenge to develop a system that is both capable and cost effective to print >100k parts.â€�

More than simply multiple voxeljet 3D printers in a line,Â VJET X-IOB is concerned with the singular productivity of the machines themselves.

â€œWe took a fundamental look at all the steps in our process and identified opportunities for innovation,â€� explains Reeves, â€œThis has resulted in printers that are running 10 times faster than our current printers and, along with partners, we have automated post processing to take out the manual interventions.â€�

The result is a complete end to end additive manufacturing system, producing a high volume of parts. 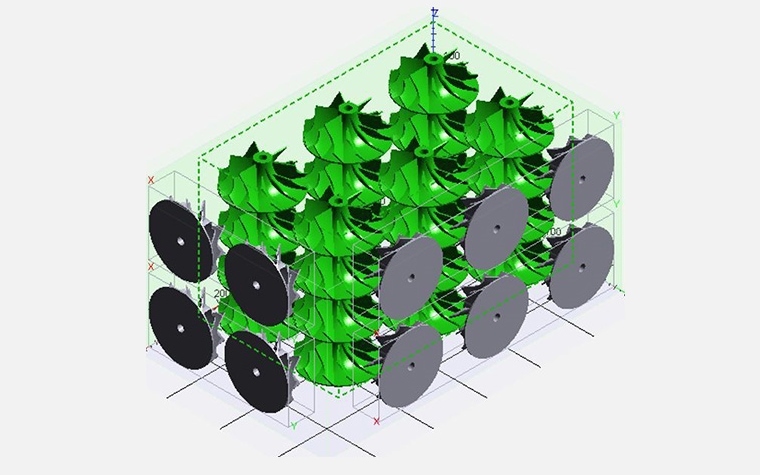 The VJET X-IOB production line has been developed for the initial purpose of producing casts for critical engine components.

When, eventually, further details are released, Reeves expects to see â€œsignificant interest from automotive and aerospace customers in this production systemâ€� as â€œthese markets are already well invested in AM and they have been waiting for such a system to make production viable.â€�

Across automotive, a great deal of effort is being applied to the development of additive manufacturing solutions. Recently, BMW Group investedÂ â‚¬10 million to establish a specialist Additive Manufacturing Campus, and the technology is improving invaluable to saving thousands of dollars in tooling production.

On the lookout for new talent or seeking a career change? Search and postÂ 3D Printing JobsÂ now.

The Mosaic Manufacturing Palette 2 â€“ an upgrade the original Palette â€“ is a self-contained system for full color 3D printing. It works by cutting and splicing multiple filament colors and then feeding them through as the object is printed. The system uses a unique and internal cutter called the Splice Core that measures and cuts filament as it prints, ensuring the incoming filament can change colors quickly and easily. 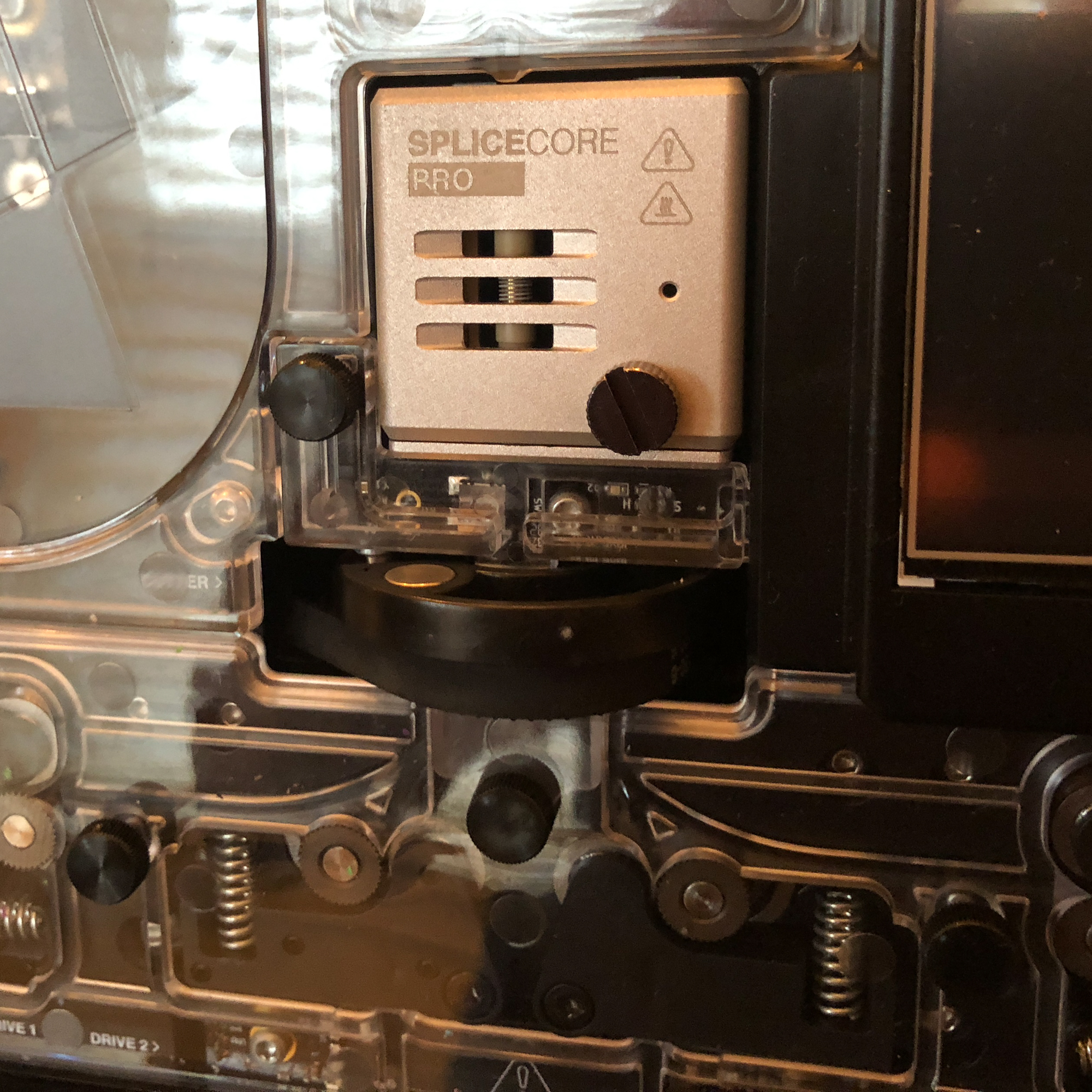 The printer can out items in four colors and it can print any amount of any color. It extrudes excess color into a little object called a tower, allowing it to print as much or as little of a color as necessary. It also has automatic runout detection which lets you print larger objects over a longer period.

It works with a number of current 3D printers and the printers require no real updates to use the Palette or its more robust brother, the Pro. A new piece of software called Canvas allows users to plan their color prints and send the instructions to both the Palette and the printer for printing.

Itâ€™s a very clever hack â€“ instead of making the printer do all the work you instead make the filament do the work. Because it is a self-contained system you can use the Palette with nearly any printer although the team is working on native support for many popular printers. They are able to print lots of interesting stuff including 3D printed phone case models, rubbery watch bands using stretchable materials, and even educational objects. Most impressive? They were able to print a scan of a brain with evidence of a tumor visible in yellow. While itâ€™s not completely full color â€“ yet â€“ the Palette is a great solution for those looking to print color on a budget.

Susquehanna Bancshares set a $16.00 price objective on 3D Systems (NYSE:DDD) in a research note issued to investors on Friday, August 10th. The brokerage currently has a hold rating on the 3D printing companyâ€™s stock.

3D Systems (NYSE:DDD) last announced its quarterly earnings results on Tuesday, August 7th. The 3D printing company reported $0.06 earnings per share for the quarter, topping analystsâ€™ consensus estimates of ($0.06) by $0.12. The firm had revenue of $176.57 million for the quarter, compared to the consensus estimate of $165.83 million. 3D Systems had a negative return on equity of 9.22% and a negative net margin of 11.54%. research analysts anticipate that 3D Systems will post -0.15 EPS for the current fiscal year. 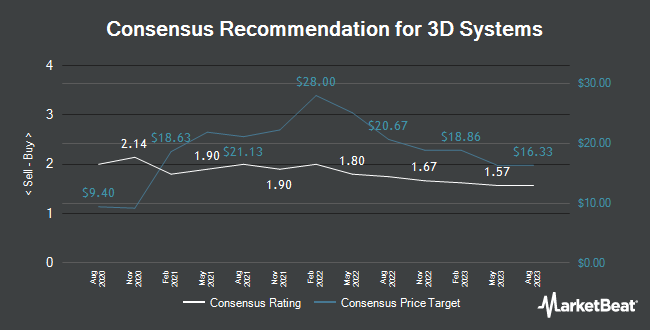 A new biomaterial company, Â FibreTuff,Â has announced plans to begin manufacturing cellulose-based biomaterials that are biocompatible, absorbable, and nondegradable for Class I and II medical devices. The companyâ€™s PAPC ingredients can be compounded into pellets to make 3D printing filament that can be used to print a variety of medical devices and implants.

â€œFibreTuff compounds biomaterials that contain celluloseÂ and blends them with thermoplastics branded as PAPC (polyamide, polyolefin, and cellulose) compositions for use in Class I [and]Â IIÂ and eventually Class III permanent implants for the medical industry,â€� explainedÂ FibreTuff founder and president Robert Joyce. â€œWeâ€™ve now brought on partners, purchased manufacturing equipment, and now leased space in a facility located in West Unity, Ohio.â€�

FibreTuffâ€™s PAPC filament can be used in 3D printers without the odors traditionally associated with the printing process. The biomaterial will also cost about 30% less for device makers in need of things like cervical spacers and other implantable devices. The material also has the huge advantage of being â€œradiopaque,â€� meaning it can be seen onÂ an x-ray without requiring additives like other products on the market.

â€œYou can see in an x-ray where the tissues and bone grow into the implant made with PAPC,â€� Joyce said. â€œOur FibreTuff PAPC is a hydrophilic compound that is coating friendly to support a printed circuits design and construction through an ink process by nScrypt located in Orlando, Florida. Even the specific gravity of the compound is 20% lighter than [that of] other materials currently on the market, which can translate into lower material costs to produce 3D printed parts.â€�

Among the other characteristics of the FibreTuff filament are that it will not dissolve inside the bodyÂ and has already passed USP Class VI testing performed by NAMSA for implantation, the company reported in a news release. The filament also has a weight and composition very similar to actual human bone, which could suit it for 3D printing bones for academic use in medical school.

â€œThe human bones that are 3D printed with FibreTuff PAPC offer similar features to an actual human experience, having good screw retentionÂ and sawing and cutting ability,â€� Joyce said. â€œOther 3D printed resins have challenges with these types of features, but we have the flexibility to print different sizes of human bone that actually resemble real human bones. A local university has been using pig and cow bones for their medical students to practice on, but we are aiming to have the students 3D print bones with FibreTuff PAPC that they can actually practice on.â€�

While the company officially launched operations within the last week, the company has spent the last four years not only developing the technology, but also recruiting partners and taking orders. Now that it is moving toward a new phase in sales and marketing, Joyce saidÂ that the company hopes to begin producing PAPC implants within the next 16 months.

â€œApproximately 16 months from now we hope to have PAPC in permanent implants for spine, trauma, and sports medicine that can show much improved osseointegration versus PEEK and metal implants,â€� he said. â€œWe also hope to begin reducing the cost to produce these types of implants by 30%. We want to work with hospitals, colleges and universities, and medical device manufacturers to develop a new way to deliver education and functional tools and models to the medical market.â€�